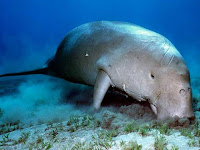 Introduction to the Sirenia
Dugongs and Manatees
Manatee. Photo by Susan Middleton, © 2003 California Academy of Sciences.
Sirenians are slow and passive mammals of tropical and sub-tropical waters. Their large thick bodies betray their heritage as relatives of elephants. There are only five living species of sirenians, known collectively as "sea-cows," including the dugong and the manatees. Until about 1770, an additional species known as the Stellar Sea-cow (Hydrodamalis) existed along the Eastern Pacific coast, but the last of these were hunted to extinction for their meat and fat in by American explorers. The West Indian Manatees are currently in danger of also becoming extinct.
The first Sirenians appeared in the early Eocene in Europe, but by the close of this epoch, they had spread to tropical Asia and North America. Dugongs were the prevalent group in the Caribbean and Mediterranean until the Late Miocene, when all but the Indo-Pacific species went extinct. Subsequently, the manatees of South America entered these areas in the Pliocene.
Sea-cows are herbivores that graze on sea-grasses and related plants, though some will eat algae and floating monocots, such as Pistia and Eichhornia, and they will occasionally eat shellfish and dead fish. Adults may eat as much as 30 pounds of food a day, and may reach more than 500 kg.
Sirenians are solitary creatures, who come together only to mate, or when favorable local conditions attract individuals for a short time. They may live more than 70 years.
For more information about Sirenians, try Animal Diversity Web. You may also want to read about conservation of the endangered West Indian Manatee in Florida.
Oceanic Research Group has information on their site. You can also read about a study of the manatee brain.
Sources:
Carroll, R.L. 1988. Vertebrate Paleontology and Evolution. W.H. Freeman and Co., NY.
Catatan oleh Unknown pada 12:40 No comments: