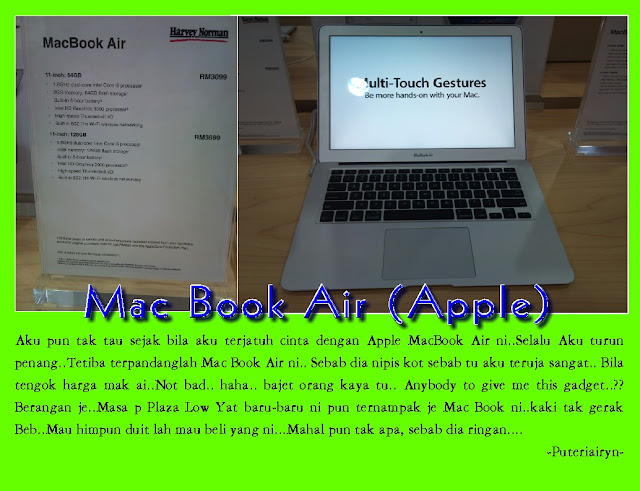 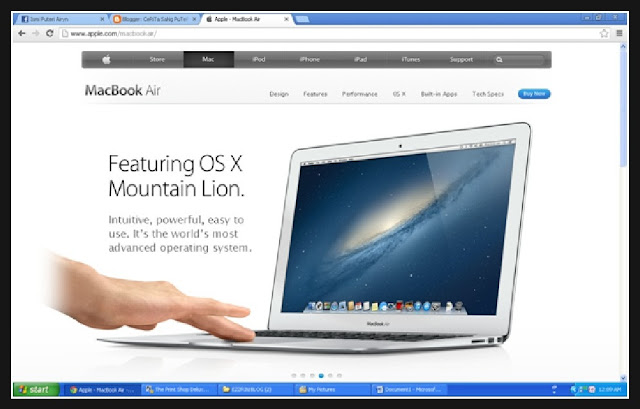 The MacBook Air is designed for thinness; it is also lighter than most competing models.The computer features a glossy LED backlitdisplay and a full-size keyboard, as well as a large trackpad that responds to Multi-Touch gestures such as pinching, swiping, and rotating. With the release of Mac OS X Snow Leopard, the Air's multi-touch trackpad also supports handwriting recognition of Chinese characters.
On the 11-inch MacBook Air, the left side of the computer has a MagSafe power connector, a USB port, a headphone jack, and a microphone.The right side of the computer has a USB port and a Mini DisplayPort, now sharing Thunderbolt function in the 2011 version. On top of the screen bezel there is a webcam, first dubbed iSight and now the FaceTime camera.
The MacBook Air was the first subcompact laptop offered by Apple since the full-featured 12" PowerBook G4 was discontinued in 2006. It was also Apple's first computer with an optional solid-state storage drive.ArsTechnica found "moderate" performance improvements of the 64 GB[note 1] solid-state drive of the first generation Air over the standard 80 GB hard drive in tests. On October 14, 2008, new models were announced with improved capacities of 128 GB (solid-state) and 120 GB (hard drive). For the late 2010 MacBook Air, only flash storage is available, in 64 or 128 GB capacities on the 11" model, and 128 or 256 GB on the 13".
Catatan oleh Unknown pada 00:09